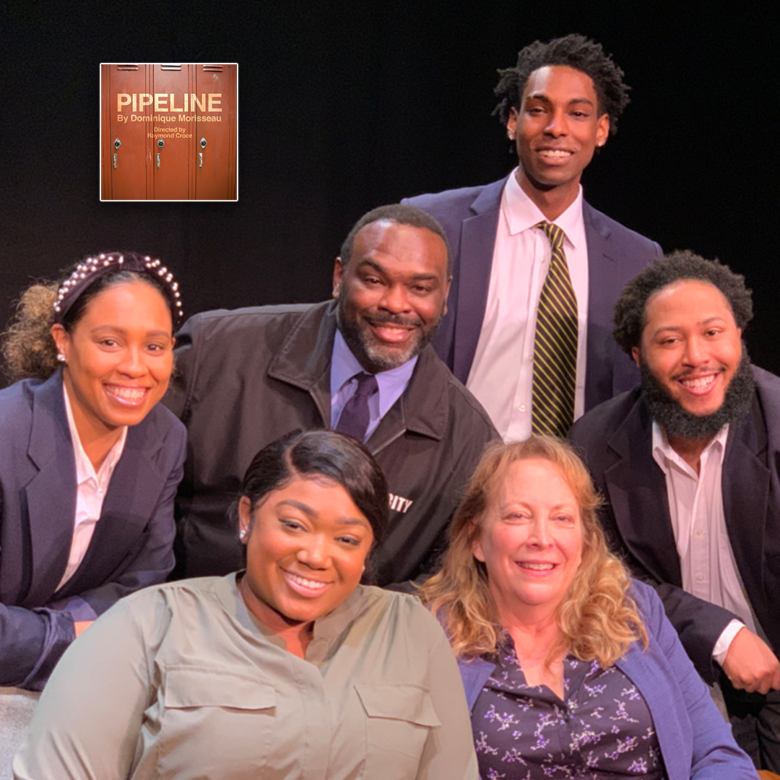 Pipeline, Dominique Morisseau’s compelling exploration of the modern education system and those it does and doesn’t privilege, showcases the pluck and polish of South Camden Theatre Company (SCTC). The 16-year-old company, based across the river from Philadelphia in Camden’s Waterfront South neighborhood, delivers one of the strongest streaming productions I’ve seen from a local theater since the pandemic shutdown.

Nya (Sasha Allen) confronts a system that doesn’t serve people who look like her and her son (Brian Neal.) (Photo courtesy of SCTC.)

Morisseau’s work has been well-represented on area stages in recent years, particularly at People’s Light in Malvern, which hosted the world premiere of her brilliant Mud Row is 2019. Pipeline, which debuted at New York’s Lincoln Center Theater in 2017, in a production that was later shown on PBS, receives its regional premiere here. It’s gained a fair amount of traction on regional stages since its first appearance, likely due to the timely social issues it addresses.

The power of education?

The title refers to the “school-to-prison pipeline,” a well-established concept that connects harsh educational policies with a tendency to criminalize young people, especially those from marginalized communities. Morisseau considers the issues from two sides. Nya Joseph (Sasha Allen), her protagonist, is a passionate public-school English teacher. Although not ignoring the systemic disadvantages that her students face, she believes in the power of education as a force for social good.

Nya also sends her son Omari (Brian Neal) to a predominantly white boarding school several hours away from their home community. The play’s inciting incident, described but not seen, involves Omari lashing out at a teacher for making a comment he perceived as racist. As Omari faces expulsion, Nya confronts how the system she works within does not support students who look like her son, or herself, regardless of their location or prestige.

When I first saw Pipeline several years ago, I found it thought-provoking and sincere, though somewhat lacking in dramatic thrust. That feeling remains. Morisseau’s focus sits squarely with the big-picture elements of the story, sometimes to the detriment of character development. Even though Nya and Omari are given significant stage time, they can feel somewhat thinly drawn; other supporting characters, like Nya’s distant ex-husband (Nathan Alford-Tate) or Omari’s well-meaning girlfriend (Shawneka Ponder), are even less fleshed out. Laurie, a foul-mouthed colleague of Nya’s who remembers the days of corporal punishment with fondness, verges on caricature, despite a restrained performance from Libby White.

The play clocks in at 85 brisk minutes, and it’s the rare case of a recent dramatic work that could benefit from some extra length. Morisseau’s best writing shows that she is capable of addressing the macro- and micro-elements of this issue with equal finesse, as in a tense scene between Omari and his estranged father. And when Nya gives a lesson on Gwendolyn Brooks’s “We Real Cool,” we sense her skill at reaching students, even though it largely unfolds as a monologue.

Despite my reservations about the play, SCTC’s production, under Raymond Croce’s tense direction, is virtually faultless. Allen conveys Nya’s enthusiasm and her world-weariness, often adding layers that aren’t in the script. She and Neal communicate a strong parental bond. And when Neal finally gives voice to the episode that led to Omari’s breaking point, his performance is heartbreaking.

The production itself was filmed on the stage of SCTC’s longtime home, the Waterfront South Theatre, and it felt so welcome to see the performers interacting together inside an auditorium. An SCTC spokesman told BSR that the rehearsal process began virtually before moving to masked, socially distanced in-person run-throughs and that all personnel received rapid Covid tests on the day of filming.

The cinematography and editing create a seamless, engrossing experience. Morisseau wrote projections into her script, and they are rendered here as interstitial montages, which add context and clarity to the surrounding scenes. I don’t know SCTC’s budget, but I came away more impressed on a technical level than I have from offerings by other, more well-established companies.

The success of Pipeline bodes well for SCTC’s other planned digital productions, which include Daphne’s Dive—a Philly-set play by locally born writer Quiara Alegría Hudes—and The Brothers Size, by Academy Award-winner Tarell Alvin McCraney. It also serves to remind audiences they should always keep an eye on what the smaller theaters in our region are getting up to. You may be pleasantly surprised.