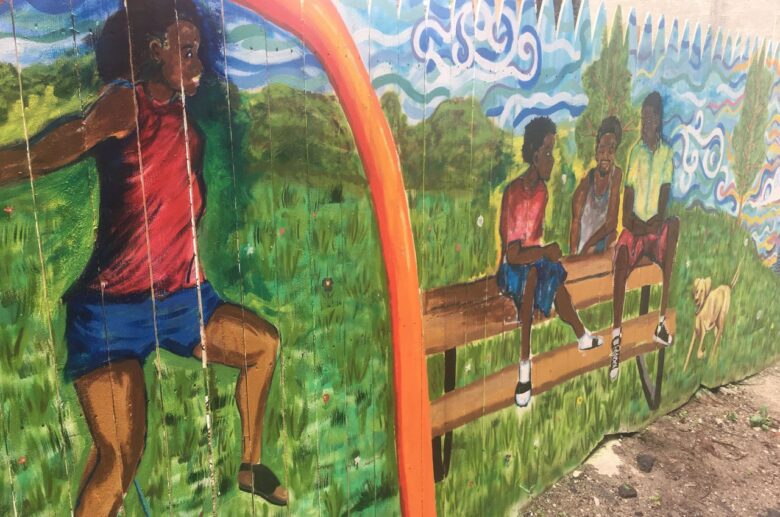 May 17, 2022
UncategorizedComments Off on ‘Camdenlot’ mural plants seed for art community’s future

By Bill Duhart | For NJ.com

Asiyah Kurtz believes the art inside and outside of her Camden gallery can be transformative and healing for people who live here, and the wider region as a whole.

A recently-completed mural along an 80-foot wooden-plank fence outside the Camden Fireworks gallery is evidence of that potential, said Kurtz, the executive director of the gallery.

“The mural is a wordplay on the story of Camelot,” Kurtz said. “‘Camdenlot’ illustrates the possibilities of a Camden where people feel represented and are living in a place of creativity and wholeness.”

The barrier between the gallery – housed in a stone and brick former firehouse built in 1899 in the southeast corner of the city – and its neighbors has been transformed into a story. The mural features children playing, relaxing on park benches under rainbows, and ships sailing on a river.

The hardscrabble neighborhood was once part of a key promenade. But now weathered facades of row houses and storefronts remain near the city’s waterfront on the Delaware River across from Philadelphia.

Kurtz believes the art inside and outside of her gallery can be transformative and healing for people who live here, and the wider region as a whole.

Kurtz said a substantial part of a $10,000 grant from the Camden County Cultural Heritage Foundation helped pay for the mural and training for five local artists.

Kurtz said she believes art can create social change. She also believes people who expressed outrage over the murder of George Floyd in 2020 and racial injustice could support inner-city art exhibits like the ones created and displayed at Camden Fireworks to affect change.

“We’re at a really critical time,” she said. “Social justice is either great or awful. It’s either the beginning of the world or the end of the world. We speak about creating a better world by addressing social inequality in art in a residential neighborhood, touching a community in a relevant way.”

Jon Cofsky –- a local artist and president of the Markeim Arts Center in Haddonfield, a quaint Colonial-era town 9 miles away – donates part of studio space he rents at Camden Fireworks to one of the five local artists who painted the mural.

Markeim also displays some exhibits that originated at Camden Fireworks in Haddonfield.

Kurtz said the mural – painted by the We Live Here Artists Collective of Camden locals Priscilla Rios, Donald Williams, Adriana Amador-Chacon, Larodge Johnson, and Breiner Garcia – will be maintained and preserved by the gallery.

“It’s not just about having art in the alley,” she said. “It’s about growing an art ecosystem.”