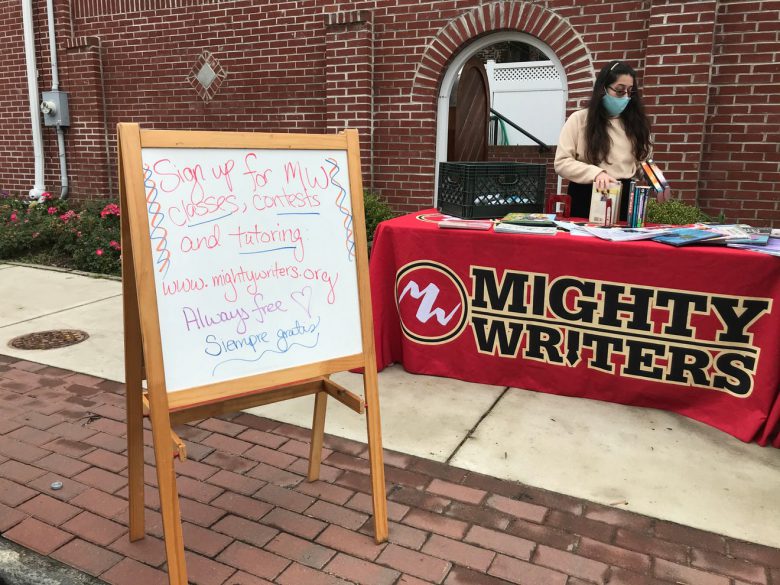 November 30, 2020
UncategorizedComments Off on Beyond Haiku – Writers House Expands its Mission

CAMDEN — The normally neat Nick Virgilio Writers House was in a state of disarray.

Boxes sat on the hardwood floors. Books were piled high on shelves, tables, chairs. On a cold, raw November day, the windows were closed, but Robin Palley and Henry Brann, board members, sat on folding chairs, masked and socially distanced, to talk about how the nonprofit’s mission has changed dramatically since the COVID-19 pandemic began.

“We were truly worried we’d have to shut down,” said Palley.

The house, a red brick structure on the corner of Broadway and Jasper Street in South Camden, isn’t hosting writers’ roundtables, poetry readings or Mighty Writers sessions with children and teens. There are few people going inside, but it’s not exactly empty.

And its board members’ fears have not come true; the Nick Virgilio Writers House has not shut down. Grants from the Cooper Foundation and Camden County Cultural and Heritage Commission combined with PPP funds and private donations have kept it going, Palley said.

“We’re wrapping the physical house we can’t really use right now into our other services,” she said.

Those services now include a lot more than nurturing writers, poets and readers: It’s hosted online contests that have received entries in the favored genre of its namesake, haiku, from poets all over the world. It’s become a more vital part of its South Camden community, hosting frequent food, diaper and book giveaways. And it’s playing test kitchen, with instructional videos that highlight healthy recipes using ingredients in the boxes Mighty Writers, gives away, and items recipients can find at their corner bodega.

Writing as a coping mechanism

Its core mission remains poetry, and haiku in particular. Its namesake was a Camden native who specialized in the simple Japanese form. Virgilio stretched the bounds of the simple 5-7-5 syllabic structure and went beyond the traditional natural themes. His influence on the form remains strong, as does his connection to Camden — he’s buried in Harleigh Cemetery, not far from the neighborhood where he once lived.

“Haiku, as an exercise in mindfulness, is getting a boost during the pandemic,” Palley said. “It’s inspiring people to write as a stress reliever, and to cope with this strange time.”

Monday Mindfulness online workshop and Haiku in Action have drawn readers and contributors far from Camden. The latter uses prompts posted weekly on the house’s Instagram feed: “The agony and bliss of waiting”; “Fall 2020: Your sights, hopes and dreams of a modern Autumn”; and “Lies, Truth and Power: Scenes from a post-fact world” are some of the topics meant to inspire poets.

And they have: Palley said the prompts have elicited responses from poets and aspiring writers from as far away as Uzbekistan and India. Each week, winning haiku are shared as well; entry is free but a small donation is welcomed.

“It’s been a really unexpected response, with about about a third local, a third national and a third global,” Palley said. “We’re serving an audience that has one foot here in Camden and one foot across the world.”

It’s been a bit of a learning process, she admitted, as they’ve had to pivot from in-person poetry events and workshops to the virtual realm. “We’ve learned a few things, like that there’s an appetite for virtual, Zoom, Facebook and Instagram engagement. We’re trying to keep the programming engaging for the people who are present and the ones who are distant.”

Local poet Cassie MacDonald hosted a video “Ginko Walk” through South Camden, reading poems and stopping by neighborhood landmarks. Palley and Brann walked through a waterfront park in another video.

For the ones who are near, the writers house has teamed with Mighty Writers to give away food, books and diapers to families in need. But they wanted to go a step further, not just giving away food but helping people make the most out of what they receive.

Feeding the body and the soul

To that end, they’re working on YouTube videos featuring Chef Carla Norelli, as she creates easy-to-make recipes featuring ingredients found in the food boxes Mighty Writers distributes, as well as ingredients people might find at their neighborhood bodega — an important nod to those who don’t have access to their own transportation, and to Camden’s status as a food desert.

The Art Unboxed videos, shot in a third-floor kitchenette at the writers house, are meant “to maximize the products in the (food distribution) boxes, because sometimes you don’t know what you’ve got in there,” said Norelli.

There are sometimes unfamiliar ingredients, or some that people simply don’t know how to prepare in a tasty, nutritious way, like kale, she explained.

“We wanted to find a way to help people amplify and extend those ingredients, not just to what’s in the box but also what they can get at the corner store or bodega, or wherever they can use their EBT cards.”

The videos offer a nod to writing, as well, encouraging the creativity that’s innate to cooking and to writing, with prompts inspired by the recipe for haiku or other poems.

The goals are not only to promote nutrition and reduce food waste, but also to reduce the stigma around hunger and food insecurity, Norelli noted.

“There is a need and there is an interest,” she said. “We want to take the stigma out of getting a CSA box or going to a food bank; we want this to be something fun, something where people can get the kids involved and have a creative outlet.”

Though Mighty Writers operates independently of the Nick Virgilio Writers House, its Camden program director Catherine Buck recalled a week when Mighty Writers was “in the lurch with our donations.”

“Their team really stepped up and helped us get food to give away,” she said.

Plans are in the works for translations into Spanish and Mandarin as well, Palley said, and the writers house is in discussions with Heart of Camden and Rodeph Shalom, a Philadelphia synagogue, for more collaborations.

The videos, Palley said, are “longer than a TikTok but shorter than a Food Network show,” enough to grab and keep the attention of kids in particular, so they can help prepare meals with their parents.https://1b28d2159302313c9c622bb792adbe9a.safeframe.googlesyndication.com/safeframe/1-0-37/html/container.html

Buck said the distributions will continue for the foreseeable future, and they welcome any help, from the writers house and anyone else.

“The need is definitely going up as it gets cold and (COVID-19 case) numbers are going up,” she said.