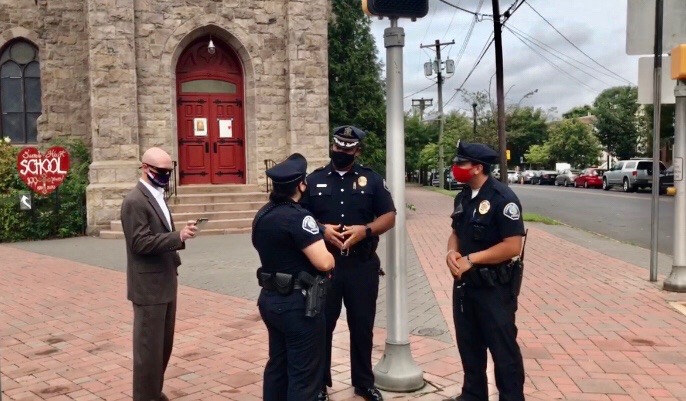 November 30, 2020
UncategorizedComments Off on Police Walk The Beat

‘We are out of the car’: South Camden residents take notice of new police walkthrough strategy

n early spring, Camden police officers began walking around the Waterfront section of the city in pairs, attempting to build relationships with residents and change the perception that they are only available for emergency calls.

For the past four years, Charles Brown has lived off of Broadway and Ferry Avenue. This year, he has witnessed a decline in the amount of drug deals that occur in his largely Black neighborhood when the police patrol by foot.

“The drug trafficking, it cuts it down tremendously,” said Brown, who worries often about the safety of the neighborhood where he raises his 2-year-old son. “What they are doing is good for the community. They’re very warm, very positive, and what they seem to be doing is helping.”

“We want to ensure that our officers ultimately know exactly who lives here, how they can help. They are going to be able to take on a hands-on approach to being a support mechanism for residents and not just meeting them when there is an emergency,” Keashen told WHYY.

Building relationships with the community became a focus of the Camden Police Department after an unprecedented overhaul in 2013. The prior year, Camden — a city of roughly 74,000 residents — recorded 67 homicides and 172 shootings. Bestowed upon the city during that time was an unflattering title: America’s most dangerous city. However, the retooling of the Camden Police Department has resulted in lower crime.

Lieutenant Gabriel Rodriguez, who joined the Camden Police Department in 2003, remembers how he and others worked before the overhaul.

“I was one of those officers that patrolled in a police car, and you wouldn’t see me outside of the police car, because that was the culture then. We were built to respond and react, not build relationships with the community,” admitted Rodriguez, who has served the South Camden area for the past four years.

Rodriguez praised the shift in culture, noting that he and his colleagues are actively listening to residents’ complaints and reacting to them. He further said: “Now, we are out of the car and more approachable. We want to introduce ourselves.”

Officer Juan Torres and Officer Sophia Grandinetti are both rookie officers who patrol the Fourth Street neighborhood. They believe building relationships with residents is key.

“If you give respect, then you’ll get respect,” explained Grandinetti, who’s been patrolling the South Camden area for only a year.

Torres tells WHYY that the neighbors “love seeing us in this area, walking around some of the side streets that people don’t go through, like Filmore.”

One of the people less happy to see the police is Ayinde Merrill, the president of Camden Arts for Change and a vocal critic of the police department. In June, the 25-year-old activist served as a key organizer of a march to the Chief J. Scott Thompson Camden County Police Administration Building, where demands of the police were read aloud. Merrill said the police walking around the community doesn’t make much of a difference.

“Residents don’t know the names of the police officers. Most are rotated and don’t make a genuine connection with people anyway. Residents feel like they’re being patrolled,” he said.

Merrill is advocating for less police patrol and for a police force that reflects the demographics of Camden residents. Echoing his concerns about the diversity of the police force is Tawanda Jones, who runs a local drill-team called Camden Sophisticated Sisters.

“I feel like our officers need to look more like us. I think that would help a lot. There’s a huge disconnect with a lot of these officers that are coming from the [Jersey] shore,” said Jones, who touts a good relationship with only a handful of the officers who patrol her neighborhood.