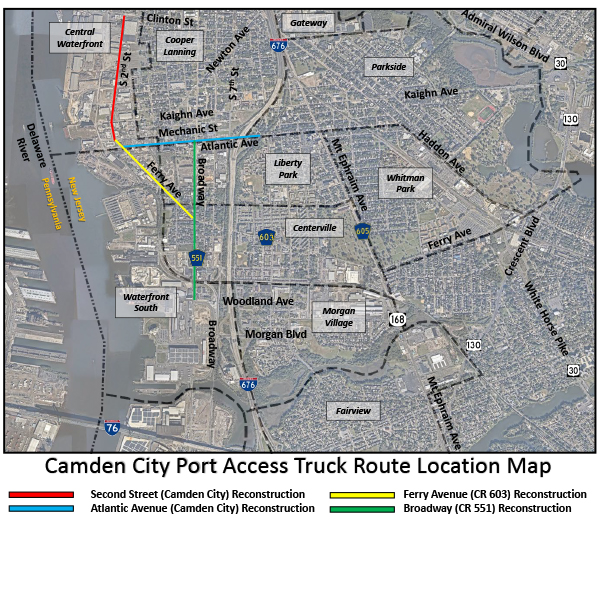 $25 million in federal infrastructure funds to rebuild neighborhoods and port

November 9, 2022
UncategorizedComments Off on $25 million in federal infrastructure funds to rebuild neighborhoods and port

(Camden, NJ) – On Monday, the Board of Commissioners joined Congressman Donald Norcross Camden Mayor Victor Carstarphen and community members to unveil a $36.5 million federally funded infrastructure project. The project is being funded by $25 million federal infrastructure grant combined with about $11 million of state Department of Transportation grant funds.

The project will upgrade a truck route and significantly improve access between the Port of Camden and nearby I-676 as well as improve stormwater management within the Port access area and the adjacent Camden neighborhood of Waterfront South. In addition, besides getting truck traffic off residential streets this generational project will enhance and improve the quality of life for residents by rebuilding and separating the stormwater and sewer system, repaving some of the worst streets in the city and mitigate flooding that occurs on regular basis.

“This critically important project will provide significant economic opportunities for the city, state and region while improving the safety, public health and quality of life for Camden residents,” said Commissioner Director Louis Cappelli Jr. “Not only will the upgrades to the truck route strengthen the supply chain connected to the port of the city but this will also divert heavy truck traffic off residential streets, allowing Camden City residents to enjoy safer, slower and quieter streets.”

Work will include a full-depth reconstruction along nearly three miles of key roadways that serve the Port of Camden and will address poor drainage along the route that experience numerous flooding events annually.

“Improving roadway safety, truck access and the storm water system is a game changer for the quality of life and economy in Camden City and our region,” said Congressman Donald Norcross. “This project will ease traffic around the port and divert truck traffic off community roads, promote economic growth, protect the community from flooding and help businesses bring goods to market. It will also put people to work, both on this project directly and indirectly by increasing the port’s capacity to move cargo. I voted for the Infrastructure Investment and Jobs Act to create good-paying jobs and strengthen our economy, and now we are seeing this funding coming to our community to improve South Jersey’s roadways and ports.”

The project will also upgrade the existing, combined stormwater and sanitary sewer system (CSO), which is 30-years past its life expectancy.

“The Heart of Camden is a non-profit community development organization that has worked in the Waterfront South neighborhood for over thirty years. We have experienced the impacts of high-volume truck traffic and stormwater overflow flooding in our streets and the challenges both pose to the community’s quality of life” said Carlos Morales, executive director for Heart of Camden. “We welcome this historic allocation of federal funds to reduce dangerous truck traffic, improve the environment and its waterways, and better protect children and pedestrians in our neighborhood.  We thank the City of Camden, the County Commissioner, and the Biden Administration for bringing unprecedented investment to improve Waterfront South and benefit its children and families.”

Repairs will be made to segments of the existing deteriorated sewer system as well as separate the stormwater and sanitary sewers, removing 17 million gallons of stormwater per year which would otherwise overflow the CSO system. This will mitigate frequent, unsanitary street flooding that prevents the port from functioning optimally and diverts heavy truck traffic onto neighborhood streets during floods.

“This is a critical improvement to South Jersey Port Corporation’s daily operations and helps bolster Camden’s entire infrastructure network,” said Camden Mayor Victor Carstarphen. “We are ensuring the Port of Camden remains one of the most productive in the region while reducing the burden on our local City roadways.  This means less truck traffic in our neighborhoods, better stormwater management and improved quality of life for residents.  The project also leverages hundreds of millions of dollars of new investment in roadways and underground unities across Camden.  It is a tremendous victory for every community stakeholder.”

In addition to the roadway improvements, the project will address pedestrian and New Jersey Transit bus ridership access to the port by improving the lighting, sidewalks, signage, pavement markings, curbs and ADA ramps, creating a safe route for local Camden residents to access major employers along the Camden waterfront both in and around the port.

“This is a critical job and quality of life infrastructure investment,” said Andy Saporito, executive director and CEO of South Jersey Port Corporation. “It supports the port’s ability to create and support thousands of family-sustaining jobs throughout Camden and the region while reducing the traffic impacts to our neighbors in Camden.”

« ‘An angel who loved Camden’: Msgr. Michael Doyle, 88, pastor, peace activist, and advocate for city and its people, dies